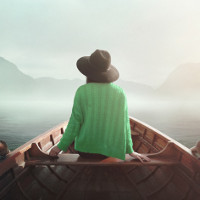 Wait a second! Isn’t this the apostle John writing this? Couldn’t you argue that he was the closest friend Jesus had on earth, the most intimate apostle, the “disciple whom Jesus loved”? Now Jesus shows up, and John doesn’t even greet Him by name? In a way, John hardly seems to recognize Him. He just spends five verses describing what He looked like and then, in verse 17, he “fell at His feet as though dead.”

When God shows up, He blows apart all our preconceived ideas about who He should be. In the First Century, the Jews were expecting a military messiah to throw off the Roman yoke and establish a sovereign Jewish state. Jesus came along and showed no inclination to pick a fight with the Romans. He told His followers to help the Roman soldiers carry their bags. And when He finally met with the Roman authorities, He simply said, “My kingdom is from another place.”

Now we live in a world where most people have Jesus pegged to be a wimp, a feminine creature with a soft and glowing face who hides in his churches and whines, “Why can’t we all get along?”

Most people are in for a major surprise.

PS. Sooner or later, it’s going to happen. A Christian leader you respect, trust, even depend on will disappoint you. How do you handle it when a Christian leader falls? That’s our topic 7/13/2019 in Inner Wealth.