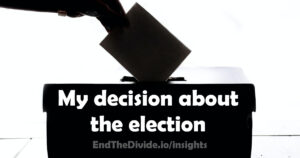 Today, here in the US, we vote.

I’m not going to tell you who I’m voting for or try to convince you to support my candidates.

But I am going to tell you about a decision I made.

I’ve decided not to demonize our candidates or our leaders. I won’t badmouth current or former presidents. Or any of our other elected officials. Not in public. Not on social media. Not in my private conversations. Not at all.

No, I don’t always agree with their actions, their words, their policies. But I won’t apply derogatory labels to them as people.

Let me tell you why.

When someone assumes or aspires to public office, they don’t lose their humanity. They’re still someone’s son or daughter, mother or father, sister or brother. They’re still created in the image of God, sent here to earth for a purpose, much loved by God Himself.

It’s not okay for me to deface the image of God.

If my life—or yours—were held up to the same public scrutiny that a president’s life is, what would would people be saying about us? How would those remarks feel?

And how well do we really know these people we judge? I don’t know any of them personally. I have no idea who they really are. I don’t have access to the same information they do. I don’t know the pressures they face.

All I have is the carefully constructed narrative that my favorite media outlet tries to spoon feed me about this person. And I have no idea if that narrative is reliable.

Jesus said, “Judge not lest you be judged.” I don’t think He’s saying that we can’t have political opinions—because we can and we should. I think He’s saying when we take the limited information we have and use it to condemn or devalue another human being, we have sinned, and we’re inviting others to do the same toward us.

The early Christian writer James wrote, “There will be no mercy for those who have not shown mercy to others. But if you have been merciful, God will be merciful when he judges you.” (James 2:13 NLT)

I’m not saying that all our leaders have good motives. I’m just saying I don’t know what their motives are. And I’m not saying they’re all good; only God can say whether someone is good. I just won’t demonize them as people.

Neither will I hero worship. Leaders are just people, sent here to do a job, ultimately answering to God for the job they do, just like you and I are.

While I won’t demonize or hero worship our leaders, I will pray for them. I will pray that God grants them the wisdom, courage, and motivation to make righteous decisions, even in the face of bullies. I will pray that truth triumphs over deception, that justice and mercy triumph over injustice, and that understanding, respect, trust, and love triumph over polarization.

Filed under: Uncategorized
Here's how we're ending the divide!

What do you get when you combine deep Christian faith with outside-the-box thinking? You get the fresh insights offered by Author Dwight Clough in his many books on personal and cultural transformation. Whether he’s tackling polarization or re-examining the route to heaven, his solutions are always unique, carefully thought out, simply explained, and compassionately conveyed with a vulnerable glimpse into Dwight’s own journey. Dwight is a national award winning writer, ghostwriter, publishing consultant, and author of over 20 books including End the Divide, The Gift of Transformation, Rethinking Our War on Poverty, Am I Going to Heaven When I Die?, and What It Means to Follow Jesus. Dwight and his wife Kim have four young adult children. Dwight loves exploring the back roads of rural Wisconsin. 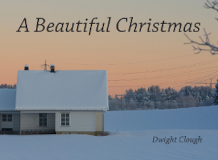 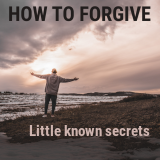