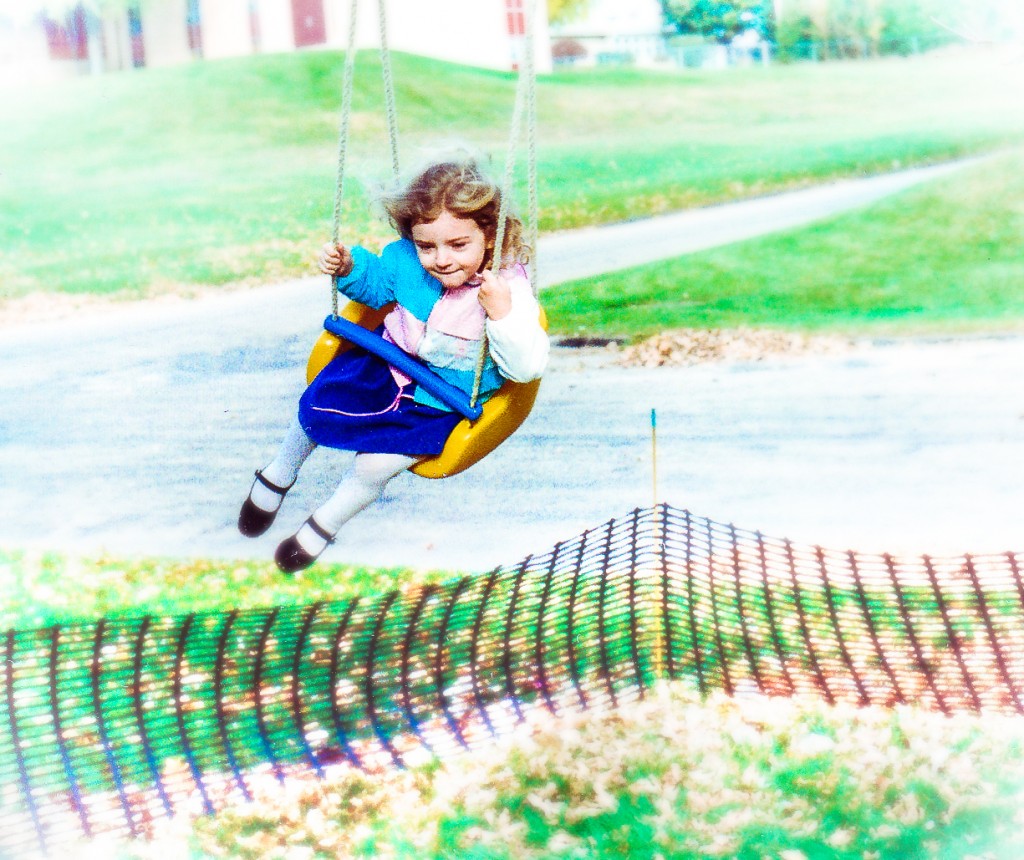 I originally wrote this when my oldest daughter was a little girl. It has become a favorite here.

I remember my first Santa Claus doubts. How could a fat man get down a skinny chimney, not just at our house, but at the houses of little boys and girls all over the world? I mean there must be hundreds.

Then came the fateful day when I learned the Truth. Two truths, in fact. My mother was cleaning something in the living room and she said, “You know the Easter Bunny is just make believe.”

That didn’t bother me. The Easter Bunny always hid the baskets behind the TV. He was expendable.

Then she added, “You know, make believe, just like Santa Claus.”

I nodded like I had known all along. But inside this revelation hurt. I wanted to believe that somewhere there was someone who cared enough about me to find out just what I wanted and to risk getting stuck in the chimney to bring it to me.

I missed Santa Claus. He had been a good friend.

I think my dad missed Santa Claus too. Now he had to take the place of the man from the North Pole. And my dad’s sack of toys wasn’t as big as he wanted it to be. Every December he sat us down and delivered the sad news. “I’m afraid there won’t be much of a Christmas this year,” he told us. “We just don’t have the money.”

I felt for him. I wanted to tell him it was okay.

“We don’t have the money,” he said and so my brother and I prepared ourselves to face the sparse holiday my father had predicted. Yet, on the morning of the 25th, we came downstairs to find our stockings stuffed and the floor beneath the tree littered with presents.

Santa slipped out of my life, and, as I grew older, a chilling realization slipped in—one that haunts me even to this day. In every city and scattered across the country, little ones, with hearts full of hope, hang up their stockings with care. But the man in red flies by their homes without stopping. In the morning their stockings look no different than they did the night before.

These children don’t need to be told that there is no Santa Claus. They find out quite on their own.

Now I’m a dad. My little girl never heard of Santa Claus until one of the neighbors told her. And, at bedtime, she doesn’t ask me to tell her about a man with toys and eight reindeer. Instead she says, “Tell me about when Jesus was born.”

She knows the story well, but she asks me to tell it to her just the same.

I start with the decree from Caesar Augustus that all the world should be taxed. I tell her that Joseph and Mary had to walk a long time. And when they got to Bethlehem, no place was found for them to stay.

My daughter and I ponder that in the silence of our own thoughts. I suppose she thinks of how it would be to never find a McDonald’s with a Playland and how it would be to ride on a donkey without a car seat. But I think of Joseph. There he was, pushed out of his home by a senseless decree from a Roman emperor. He comes to the town that is rightfully his own, but no one greets him. No one takes him in. Worried, he asks around for a midwife and a dry, warm, comfortable bed for Mary. “Sorry,” people say. “Sorry, we can’t help you.” In the end, he takes shelter in a barn. And all he can offer the one he loves is a wool blanket and some straw.

I feel for him.

Then my mind goes back to my dad. I see him there at the kitchen table, sifting through a stack of bills, wondering where he will get the money to buy toys for his children. And for the little ones everywhere whose stockings are empty, I hurt. I wish I could shower gifts on them all. And I wonder, Where is the outrage from heaven?

My daughter tugs at my arm. “Tell me the rest of the story, Daddy.”

We switch to the hills around Bethlehem. “On the night Jesus was born,” I tell her, “in the hills, the sheep were sleeping—sleeping away. ’Baaa. Baaaa.’ They were dreaming sheep dreams. The shepherds were there, watching over their sheep.

“All of a sudden, an angel appeared to the shepherds! They were afraid.

My daughter always smiles when I tell her this.

“The angel said, ‘I bring you good news of great joy. For tonight unto you in the city of David is born a Savior, who is Christ, the Lord. And this will be a sign unto you: You will find the baby lying in a manger.’

“And suddenly, all across the sky, the night was bright with angels. And they were singing, ‘Glory to God in the highest. And on earth peace, goodwill to men.’”

My little girl’s eyes get big as we look at the bedroom ceiling together. And I wonder to myself, Can she see what my eyes cannot? Can she see the heavens filled with angels?

What would it be like to see the heavens open? I ask myself. But, though I try, I can see no vision of angels. Instead of angels, I see a man. But he’s not in a shepherd’s field; he’s in a hospital room. And he’s not singing. He’s dancing, holding his newborn daughter in his arms, filled with emotions he could never put into words. I see him there, spinning and twirling, and I realize that man is me.

“Daddy, tell me the rest of the story.”

The reason for the angels’ visit begins to make sense. So, tonight, I change the story. “What do you suppose those shepherds saw when they came to the barn where Jesus was born? Do you think they saw Joseph out in front, dancing under the stars?”

“Daddy, you are silly. They saw the baby Jesus lying in a manger.”

Oh, yes. I sit there for a long time while my daughter falls asleep and dreams of angels. I sit there and think about those words from heaven: “Do not be afraid.”

And, suddenly, I want to rush back through the years and talk to a little boy who grew up to be a daddy himself and say, “Have you seen the angels? Have you heard their song? Did you know that Jesus is here?”

And then I want to stop at a kitchen table and speak to my tired and discouraged dad. “Do not be afraid. What you cannot give has been given for you.”

And I want to swoop down chimneys everywhere with angels at my side and bring the good news to every little one whose heart was filled with hope. “Do not be afraid. The heavens have opened for you. The angels are here for you. Immanuel has come. Do not be afraid.”

If I could, I’d bear presents to them all. Not because I think the trinkets I can give will satisfy Christmas needs. Instead, I’d bring gifts as tokens of a giving, caring God. And I’d pray that when the children finally unwrapped the paper, they’d find not a doll nor a toy truck, but rather a tiny baby, wrapped in swaddling clothes, lying in a manger.

The next morning, my wife and I are busy in the kitchen. Company is coming. Our little girl is talking to her dollies and her stuffed animals, saying this and that. We don’t pay much attention, glad to have a few minutes to straighten the house and make a meal. All at once we are arrested by her words:

“Do not be afraid. For I bring you good news of great joy.”

Comments are closed for this article!